Listen to your favourite music wherever you want! 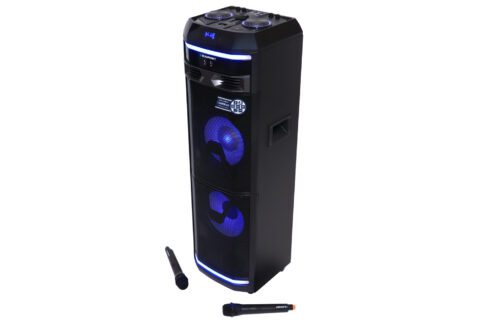 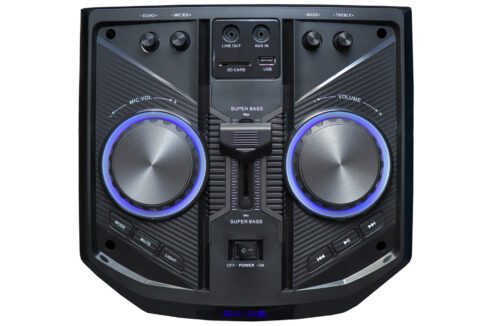 A real dose of energy, strong, clear sound and lights creating a club atmosphere… how do you get it all and start a great party? The PS11DB Audio System with Bluetooth and karaoke functions will surely prove essential for such occasions.

It is the perfect solution for both a house party and one organised in a larger room. It is also a great way to provide music outside, for example at a picnic or a garden party.

With 1200 watts of maximum power, achieving clear, rich, and dynamic sound is not a problem. The system guarantees that no matter what music it’s playing, it will always be of the highest quality.
The main advantage of the latest Power Audio system by Blaupunkt is the ability to play music wirelessly through the audio-streaming profile. It’s perfect for listening to your favourite hits stored in the memory of smartphones or tablets, and, when connected to the Internet, also from streaming services or Internet radio stations, which young people love, and often use during meetings with friends.

The PS11DB, thanks to the AUX input, can operate with an MP3 player, TV or game console. It allows you to connect to all devices which do not support Bluetooth but have an audio output to the loudspeaker.

The PS11DB brings out the full spectrum of sounds from songs, regardless of whether they are dominated by strong rock, melancholic jazz, or dance pop. Thanks to the equaliser, which has six modes (Flat, Pop, Rock, Country, Jazz, & Classical), the songs played will meet the expectations of enthusiasts of a range of music genres. An additional independent treble and bass adjustment allows you to precisely set the desired timbre. The Super Bass function and two 10-inch drivers ensure that all fans of lower frequencies will enjoy listening to their favourite performers.

What’s more, any living room can become a club room or a real disco! The loudspeaker has built-in colourful Disco LED lighting, which can change with the rhythm of the songs being played, or according to a fixed pattern. Such a combination of light and music will surely be a thing which all those at the party will remember for a long time!
The built-in FM tuner allows you to listen to your favourite hit charts and radio broadcasts, and the memory function of up to 40 stations makes it unnecessary to search for frequencies every time.

The USB port and SD card slots allow you to play your own playlists from devices connected to the system, such as pen drives and removable drives, as well as to read the contents of SD memory cards. They ensure you can play music files in the most-popular audio formats, i.e. MP3 and WMA, which, thanks to the high compression ratio of the audio data, are relatively small in size, with a high quality of sound at the same time.

Equipping the system with a karaoke function will make each party even-more alluring, and its participants will be able to feel as if they are on a real stage. The PS11DB model has two wireless microphones for singing as a duet. In order to achieve the most-optimal sound tone for the microphone, it is possible to set the low and high frequencies separately, as well as the echo function, which eliminates any possible reverb. The loudspeaker also features two additional inputs for optional wired microphones, which greatly enhances the karaoke capabilities of the system. As you know, singing together is always great fun for both kids and adults.

The PS11DB model is equipped with the TWS (True Wireless Stereo) function, which facilitates the wireless connection of two devices. This means that you can play music from two identical speakers at the same time. After successful pairing, the “right-channel” sound is output from the master speaker, and the “left-channel” sound is output from the second connected device. With this configuration you can get excellent quality stereo sound which can really surprise you.

The set is also extremely mobile, in terms of both transportability and music playback without electricity. Thanks to the built-in rechargeable battery, the loudspeaker can operate for up to 4 hours, so you can easily take it outdoors and organise an open-air party. It can be carried comfortably and safely thanks to the convenient handles mounted on the side walls of the loudspeaker.
Turn on the PS11DB and enjoy meeting your friends and listen to your favourite music wherever you want!

Show service overview
Page load link
We use cookies on our website to give you the most relevant experience by remembering your preferences and repeat visits. By clicking “Accept All”, you consent to the use of ALL the cookies. However, you may visit "Cookie Settings" to provide a controlled consent.
Cookie SettingsAccept all
Manage consent